Georges Gilbert Baongla who usually refers to himself as the first son of Paul Biya (President of Cameroon) “I am the eldest son of PAUL BIYA – and Jeanne Irene Biya is my adoptive mother” – was born of Elisabeth Baongla. Elisabeth Baongla who was a midwife was a good friend of Jeane Irene Biya (the president’s first wife) and hence it is said that he was given the then Prime Minister as a godfather. “The son of the President” was a renowned pressman and politician who has recently been incarcerated with a huge fine. He is well-known as an unfiltered whistleblower, who is good at expressing his mind which supposedly had a price (imprisonment in this case).

The president of the Republican Party was replaced by Morgan Balmer after requests for his release in January and June 2020 were denied. Morgan Balmer later created his own party, Le Mouvement Progressiste 3 (MP3). The Republian Party of Cameroon (Parti Republican du Cameroun) was officialy created and went operational on April 15, 2013.

Georges Gilbert Baongla also served as the Director of publication of the newspaper Le Démenti and is known to participate in many television programs (platforms) where he talks about personalities, his former collaborators and also denounces a wide range of abuses in the country. He was a mentor to Jean-Pierre Amougou Belinga and many others. He parted ways with Jean-pierre Amougou Belinga over disagreements on money sharing from the press forum and the latter is now the CEO of Vision 4 television.

The first time he was arrested and put to prison was on the 7th April, 2007. He was charged with sharing obscene (pornographic) photos and for the accusation of a minister of homosexuality (considered a crime and social vice). He spent six months (06) months in the Kondengui Central Prison and also paid a fine of 500.000 FCFA.

The second time, he was arrested by the judicial police on the 29th of May 2019 while freely circulating in the streets of Yaounde. He was taken to the Kondengui Central Prison on the 3rd of June the same year where he was spending a term without verdict. The verdict only came in on Wednesday, June 10, 2020 sentencing him to two (02) years imprisonment and a fine of 25 million FCFA ($45,500 US Dollars). He was sentenced by the Court of First Instance Yaounde administrative center. He was prosecuted for fraud and defamation from accusations from several personalities including the CEO of Vision 4, whom he had earlier worked with. The most influential of all these plaintiffs who pursued Georges Gilbert Baongla, is Jean Pierre Amougou Belinga, the CEO of private television Vision 4.

He has so far expressed his ignorance in what he describes as a harsh, unfair conspiracy against him. It has been reported that he cried in one of his court sessions. Some have described the verdict as harsh while others are questioning the justice system in the country; saying that it has been politicized; of the view that the verdict was as wished by Laurent Esso, a close friend of Jean Pierre.

Georges Gilbert Baongla who has been described as the Defender and Sentinel of Social Equity is said to have been caught in his enemies net. As a result, it is thought that he is paying the prize of being a whistleblower which is not usually pleasing in Cameroon, Africa and the World at large. It becomes more troublesome when you speak against or about abuses by persons with great personalities or an image to protect. He is expected to be out of prison soon, as such, there is much anticipation from his lovers. 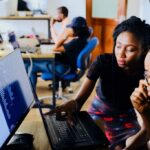